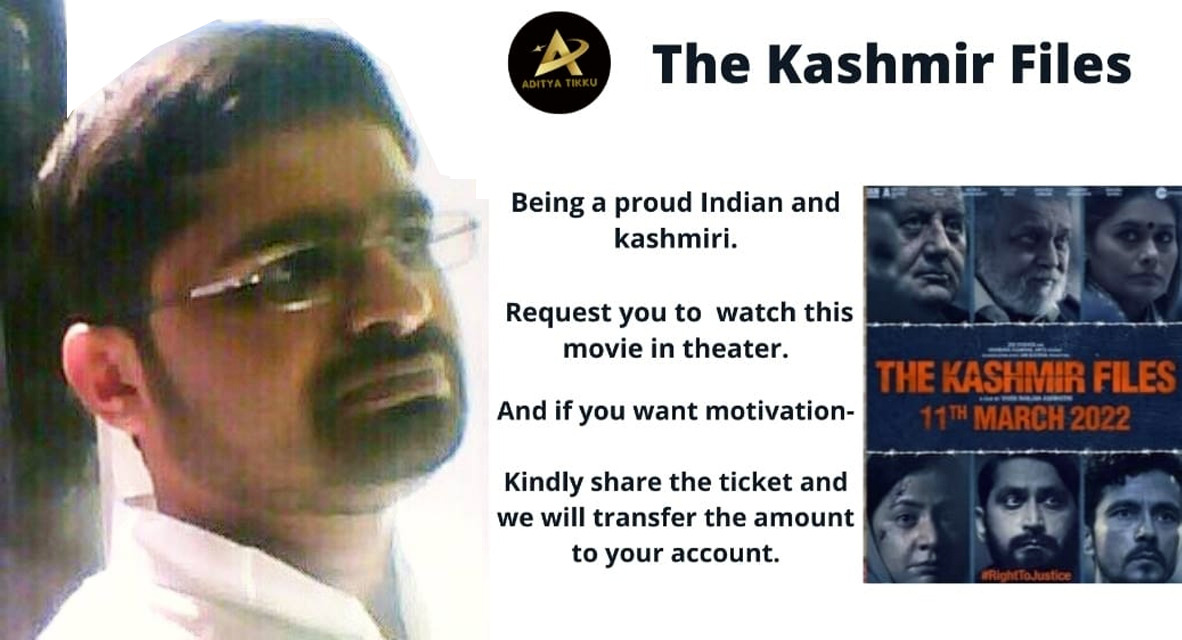 Aditya Tikku has always been in the headlines for his tireless attempts to bring about constructive change in society. His outstanding contribution in dedicating his life to helping others and ensuring that the unfortunate are given every opportunity to live a fulfilling life. Just like a festival of colours, Aditya never leaves any stone unturned in adding colour to the lives of people. His dedication to enacting social reforms and working for social fairness and transformation in society through public awareness campaigns, social work, and other activities has been greatly admired. However, his tag as a ‘Bollywood movie salesman’, who brought the issue to the public’s attention, has been depressing not only for himself but also for his fans.

Aditya is known throughout India as a writer, socialist, and feminist who works extremely hard. It is speculated that he is urging that people watch the current blockbuster film ‘The Kashmir Files’ in exchange for an incentive to do so. Without a doubt, The Kashmir Files has become a people’s film, but describing a person like Aditya Tikku as a ‘Salesman’ is completely wrong, as salesmen are the backbone of any business, whether small or large. When asked why he became a marketer for the film ‘The Kashmir Files,’ Aditya dismisses the information as fake news. Instead, he responds with a heartfelt response that says, “I’m not pleading people to see the film, which is already 30 years old. Every Indian should be aware of how Kashmiri Hindus were treated harshly and evicted from their homes. People should understand how difficult it is to be refugees in their own nation. I am not advocating for any gangster or drug addict. What will change in their lives? I don’t believe this film was made to change their lives. Rather, it was made so that the world might understand the anguish they have to endure simply because they are Hindus.”

Undoubtedly, misinformation is not a new age phenomenon, and people often spread rumours and information from their surroundings to cope with varied worries during any event. This demonstrates that the aforementioned rumours were unconfirmed and circulated with the goal to deceive. Upon careful scrutiny, it is clear that some of the messages linking Aditya Tikku to the film “The Kashmir Files” were fabricated with the intent to deceive and dupe people by spreaders. He even clarifies the erroneous facts about his family’s involvement as one of the victims of the Kashmir Genocide.

Aditya also clarifies the repayment of The Kashmir Files movie ticket price to 300 people, as it made a headline in the news. Therefore, he clarifies the inaccurate facts that the public reacted to. He said, “It makes no difference whether I did it or not… It is critical that the film receives widespread support.”. The activist himself debunked it when word of Aditya Tikku’s intention to take sanyas in the upcoming Kumbh was leaked into the media.

Aditya Tikku has always embodied power, courage, intelligence. He has been a significant contributor to the development of Indian society by his active engagement in a number of highly focused and dedicated social activities motivated by a desire to serve the country. Seeing the country’s youth development makes him proud and motivates him to put his best foot forward to assist the community.