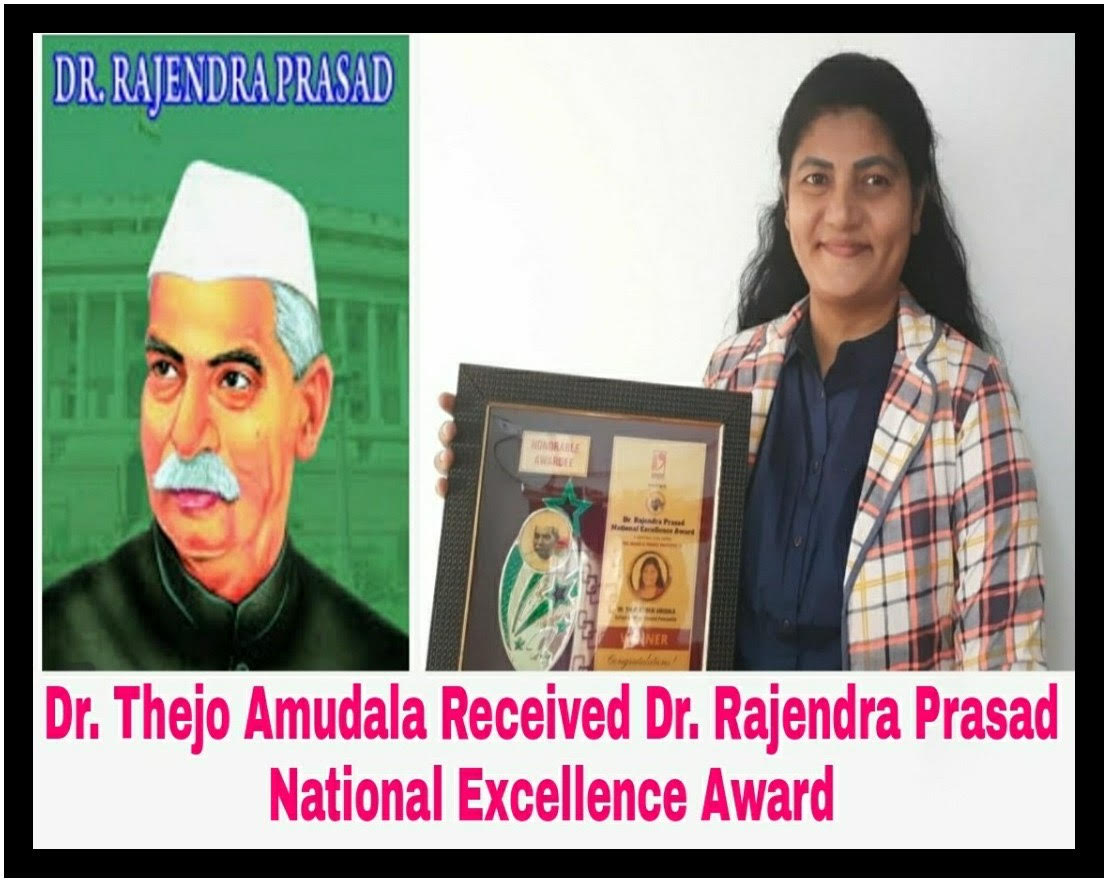 India’s First President Dr. Rajendra Prasad Award Honoured to Dr. Thejo Kumari Amudala. She is a Multi-Talented Personality who has achieved incredible feats at an early age. Over the years, her credentials have increased manifold as she has gone on to receive recognition for her work on woman empowerment, cruelty against animals, illiteracy, and other social causes. Dr. Amudala has made progress in every field she has ventured. In every field, be it business, philanthropy, beauty pageants, education, spirituality, Human Rights, Peace, and many more, she has excelled and brought laurels to the country with innumerable awards and citations to her credit. There is no doubt in her charm that she is an authentic Indian ethnic gem.

Dr. Thejo received Global Iron Lady Award for the first time and also recently received the Golden Lady Award, Extra Ordinary Woman Award, and Powerful Woman Award. She is really a Super Woman. She embodies how women can make changes in society and achieve so many things. Her support has come from her parents and family, who gave her the wings to soar high. This enabled her to make a difference in her life and that of others. She made a mark in every sphere of life. It gave her the credibility and power to go out of her way to help others too. Hence, she has been duly recognized, which is an admirable achievement. She embodies what she has been all these years and continues to be so that others can take inspiration from her and follow her path. Many articles have been Published on her till now.

Dr. Amudala is a fantastic personality juggling several careers. She has been a successful entrepreneur and activist for which awards have followed her ways, such as Swami Vivekananda Excellence Award and Dr. B.R. Ambedkar National Award. Rabindranath Tagore Literary Pride Award. By empowering women and improving their lives, she has got Nari Shakti Puraskar, Dynamic Woman Award, Real Super Woman Award, and Super Woman Social Entrepreneur Award. She has held the torch of India high in the international arena by winning the International Glory Award, Business Icon Award, International Business Entrepreneur Award, and International Brilliance Award.

Apart from that, her charisma and excellence have won her the Most Inspirational Woman from India Award, Influencer Award, Extraordinary Woman Award, Wisdom Award, Blissful Queen Award, and many more.

As a powerful woman who has worked extremely hard to get into the best universities, she topped her courses and became the Powerful Person Dr. Thejo. She won international and national recognition and love from the people who have been recipients of her kindness and benevolence. She became a role model for many people in the present scenario.