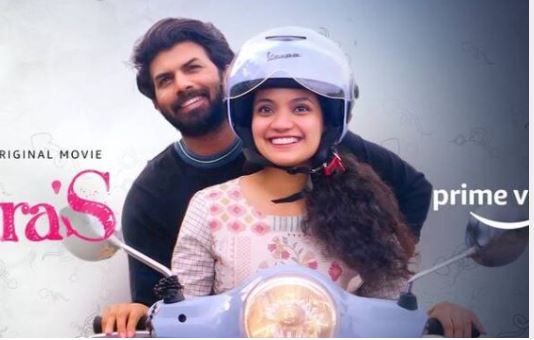 Dislodging ideas cast in stone requires more than a gentle push. In Sara’s, director Jude Anthany Joseph and scriptwriter Akshay Hareesh attempt to shake from its foundation one such idea, which has been accepted as normal in society, and by extension in mainstream cinema.

Sara (Anna Ben), an associate director in the film industry, wants to make a film of her own. While working on the script for her dream debut, she meets Jeevan (Sunny Wayne), who is taking a break back home, away from the hectic life in the IT industry. They fall in love, with Sara especially being drawn to him for the fact he shares her choice to remain child-free. But, as time passes, societal pressures begin to act on them.

In his third outing too, Jude Anthany Joseph sticks to a woman-centric subject, but the similarity with the previous two films ends there, except for the relationship between Sara and her father, which is similar to the one in Ohm Shanthi Oshana. He also retains the somewhat light treatment that he gave for heavy subjects here too. It works at times, but at other times it leaves us wishing for something more concrete.

What deserves applause though is the fact that the script never diverts from the central idea, which revolves around Sara’s choice and her intense wish to become a filmmaker. The narrative is a deft balance between these two, for the societal pressures on her choice inturn has a bearing on her dream too.

It also portrays her struggles to convince producers with her script, which we are told, does not have the elements expected from a a mainstream film. As for Jude’s film, the laudable progressive stand that it takes does not always make up for the plain, lazy making in some parts. Other than Sara’s character, the rest of them appear hazy and stuck in a single tone. The transformation in some characters too appears quick and rather convenient. In real world, women like Sara will not have it easy, as the protagonist here has.

Yet, this is a brave reversal of years and years of glorification of motherhood and looking down upon those who dare to take a path of their choice. It is a study in contrast to films like the Salman Khan-starrer Sultan, which had a woman wrestler who was working towards an Olympic gold, giving up the dream after she becomes pregnant, with the script glorifying it.

Anna Ben’s assured performance goes a long way in propping up the film even in places where it sags due to below-par writing. Despite the glitches, Sara’s is a commendable attempt at course correction on some deeply set societal norms.