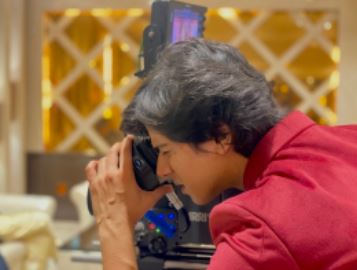 Parth Chopra is an up and coming filmmaker who stays in Delhi, India. Chopra has had a keen interest in the film industry since the age of 1 and a half. The confident intellectual actively took part in modelling and commercials, where he showed an avid interest in developing an intimate relationship with cameras. A few years down the line and in his 20’s, Parth Chopra has returned to the camera, but this time, to reign it from behind.

He was inspired the most to become a filmmaker by directors like Christopher Nolan, Gore Verbinski, and Ashutosh Gowariker. His first short film ‘Unspoken’ shows his knack for detailing and visual storytelling.

It all begins at the age of 1 and a half, when Meenu Chopra, Parth Chopra’s mother, decides to get a portfolio of her son made, a decision that owes its origin to the little kid’s utter comfort in front of the camera and the unique chemistry he had with it. Hardly a month down the line, Parth was signed onto a contract of 3 ads for Max New York Life Insurance, the beginning of a 14-year long career in infomercials, print ads, digital ads, and so on. His most significant break was being featured in an advertisement for ‘Airtel Half Marathon 2007’, which aired hundreds of times on the ‘then popular’ channels like Colors and Sony. Some of his advertisements are still in circulation, like the ones for HDFC Bank, LIC, and DR. Lal Path Lab.

At 15 years of age, Chopra decided to take a few years off-camera to focus entirely on his academics. With an enthralling interest in how the world works, Parth chose Science as the primary field in which he wanted to educate himself further through high school and undergraduate. The decision of taking Science did him well, for it only piqued his curious nature further to make him hungrier for knowledge. Towards the end of his high school education, his interest peaked in Astrophysics and Cosmology. After getting into Ramjas College, Delhi University, he decided that it was time to return to the creative side of life with his newly found scientific perspective. He became a part of the Dramatics Society of the college, from where he gained the proper knowledge of subtext and metaphors in a visual medium.

After more than a year of looking at things as an actor, Parth started viewing the medium as a director, someone who would have more control over the things that the visual piece was trying to convey. This was the perfect time for him to start watching Hollywood, something he had never consciously done before in his life. He was astounded by the storytelling of films like Shawshank Redemption and Inception and started reading and learning more about them. Time-lapse a year of the pandemic, and Chopra had written more than a dozen Screenplays for short films, one of which turned out to be the film he went on to shoot ‘Unspoken’. Filmed over a period of 4 consecutive days, Parth managed to make the film at a much lower cost than the market by convincing many people on the project, including each and every actor, to work in collaboration. He managed to manifest his vision of exercising complete creative control over the project through post-production. He also led the Set Design, Production Design, and even Costume Design for the film. “When it comes to opportunities, nobody’s gonna knock the door and wait for you to open it. You’re gonna have to be the one to select the door, find the goddamn

keys, and rotate them to finally open your door to success”, he believes. With the intention of returning to modelling soon, Parth still resides in New Delhi with his mother. With his focus on self-awareness and fitness, he Writes and Directs his own work now and stays open to all sorts of collaborations. Halloween or X-Mas, you can always count on his genius brain to be brewing an idea that one day we might know as one of the most significant sensations in the industry.