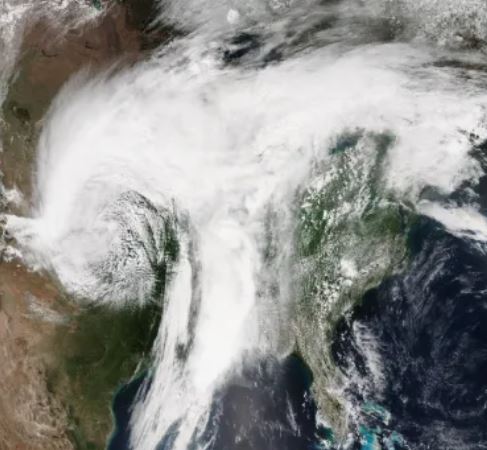 According to USA Today, 18 U.S. states are at risk of severe weather from Monday, April 11, until Thursday, April 14. Mainly stretching from the Midwest Plains to the deep South, this massive storm system brings with it risks of fires, thunderstorms, hail, tornadoes, and blizzard conditions that could result in historic snowfall in the Dakotas. Montana and Wyoming are also expected to see heavy snow with 2–3 feet deep piles.

This event would topple the Grand Forks, North Dakota, April snowfall record of 17 inches. The National Weather Service in Bismarck is predicting power outages and difficult to impossible travel conditions. The office recommends travel only for emergencies and that people carry a winter survival kit. The NWS is also predicting wind gusts up to 50 miles per hour.

On the opposite end of the spectrum, the southern Plains face possible wildfires. This threat is amplified with the potential for 30–50 mile per hour winds and unusually dry and warm conditions for this time of the year. The highest fire risk is in the Texas and Oklahoma panhandles and southern Kansas.

A tornado touched down in Arkansas on Monday, accompanied by softball-sized hail. Severe thunderstorms threaten northeast Texas, the Ozarks, and parts of the South. According to the Storm Prediction Center, the most powerful storms are poised to strike over far eastern Oklahoma and Arkansas. This activity could bring damaging winds, exceptionally large hail, and tornadoes. Conditions in the area’s atmosphere are unstable and ideal for spawning tornadoes.

On Tuesday, April 12, the severe storm threat stretched from Iowa to Texas, with Dallas, Oklahoma City, Kansas City, and Des Moines facing dangerous weather. The tornado threat will be in place until Wednesday, April 13, spreading from Illinois to Louisiana. This swath includes cities such as St. Louis, Memphis, and Indianapolis.

Rainfall of 1–3 inches could be seen from the Ohio to Mississippi Valleys, with areas expecting more than 3 inches facing potential flash floods. The storm system should subside by Thursday, April 14, as it reaches the East Coast.Admin