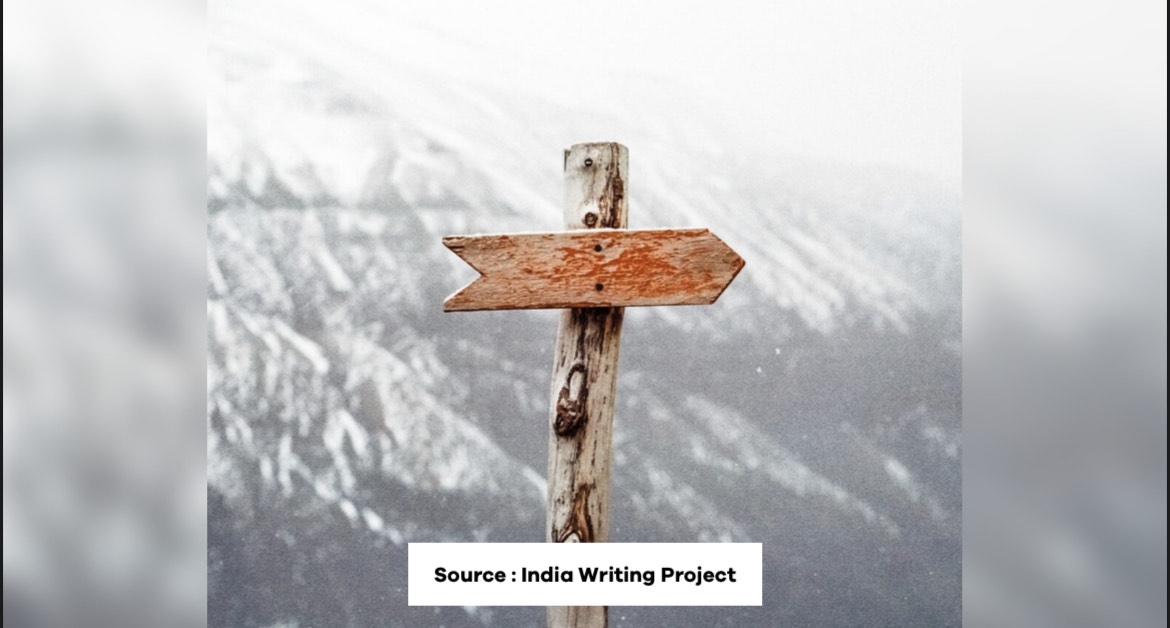 The thunderous boom shattered his eardrums. One moment the ground was steady under his feet,  and the next it was not. A flash of red, blood flooding his vision, voices calling out in despair,  everything spinning, spinning, spinning…

The plaque on the wall stared at Colonel Balbir Singh. A ‘war hero’ it declared, a respected veteran,  a man of honor. It taunted him.

The ruffle of cloth announced his wife, Shanti, entering the room for her daily ‘puja’ of the plaque.  It was disgusting, this worship of him, but he could do nothing to stop it. In all other matters his  voice prevailed, but not here.

“It is my way of saying thank you for your life,” she’d softly reply.

Shanti’s dull eyes glanced at him as she tried to smile. And, as always, she turned to put the ‘tika’  on her husband’s forehead. That day, however, as soon as she bent down towards him, arm  outstretched, the Colonel struck the ‘thali’ out of her hand, scattering its contents on the floor.  Ignoring the look of umbrage on his wife’s face, he signaled the ward boy to wheel him to his  room, and Shanti watched her husband’s crippled form make a defeated retreat yet again.

It had been two decades since the war was won. The Colonel was bellicose, borderline abusive; yet Shanti bore his belligerence with a heart of gold, just as she had been taught to. Those years without  her husband were terrifying. Blissful. She had known nothing but him. The same soldier returned a  shell of a man, and his masculinity broke- cracks swelling into voids that would swallow her whole.  Shanti. Peace.

The wounds he couldn’t inflict with his hands, he delivered with his words. The brutality he failed  to express at war was shown full-force at home.

“Fight! FIGHT!” Colonel Singh found himself at the frontline in direct contact with the enemy. He  had never known dread like that before. His spine tingled with trepidation; his feet rooted to the  spot. All around him he witnessed his comrades fight and fall. As he stood, he saw the enemy ranks  aim their guns, poise their grenades, and he knew. This was it.

The ornate wheelchair had been his home since 1999. The leather seat, the creaking wheels, they  had become a part of his skin. He detested it. There were many things he despised about his life  since then; most of them he attributed to his insipid wife. She fed him, clothed him, nagged him that she had become his mother. He had always hated his mother.

“Bal, it is time for your medicine and then your physiotherapy.”

“How many times have I told you not to disturb me when I’m alone?” his speech is already slurring. His medication made him drowsy, and, not for the first time, he mourned the loss of his vigilance.

Shanti, with her subfusc eyes, obeyed. As always.

She could never understand her husband, but after returning as a national hero, he had completely  lost her, and she feared that she had completely lost him. He had always been brusque, but the past

for a few years he had made her life a living hell. As if he wanted to punish her, make her feel the pain  he felt. And felt it, she did. The anguish, the torment. He relished it.

And yet, both were painfully aware of the fact that he desperately needed her. His inability to trust,  along with his aggression, had caused him to cast most of their family out of their lives. All he had  was her. He hated it.

He returned wounded, mentally and physically, more than a survivor- a hero, and it made him wish  he had never survived. His discomfort at the mention of his heroism was confused with modesty.  No one truly knew the full story, and he hoped with every fiber of his crushed being that no one  ever would.

A bullet missed him by an inch, and he frantically hunted for its source. The enemy persisted  towards them, towards him, bombing, shooting. There was a sudden lull, deafening silence, and  then, the world exploded.

When he came to, he found himself a few yards away from the mêlée. As he saw limbs and heads  explode, he made his decision. He wouldn’t die, not even for his country. Time was running out, the  enemy was closing in. He saw a soldier’s arm reach out for help and for a moment, he hesitated. Then Colonel Singh turned his back to the war and ran for his life.

He hadn’t realized he had fallen asleep till the sound of Shanti screaming jarred him awake. He  woke to panic all around him, thick darkness clouding his senses. For a moment he was back on the  battlefield. Another scream. The fogginess from his pills dissipated to reveal real smoke. There has  been a short-circuit. His house was on fire.

Plumes of smoke choked him. In an attempt to rise out of his chair he found himself on the floor,  his body unable to take it. His only instinct was to call out to his wife. He needed her. Shanti.

He saw her at the doorway, stretching her hand towards him like she had done so many times  before. And then, she stopped. A moment of hesitation. A crack in the peace. Memories of being  torn apart by the cripple on the floor sprung to her mind, rose with the fumes, blackening her heart.

The flames licked her skin. Her soft tearful gaze met his cold, demanding one. She looked down at  him and relished the acrid taste of power on her tongue. He looked up at her, and for the first time,  he saw something come alive. Fire danced in her eyes.

And then, it was she who turned away.